Skill Apart Tips You Can Use To Win In CS: GO

Believe it or not, losing a game is the worst thing for any gamer. But losing it because you think that you played great and the other player was cheating is even worse. CS: GO is one of many fps games where you do need practice and a lot of practice. Pro players that are reigning the game come with a lot of experience and knowledge regarding the game. However, apart from skills, which you’ll obviously develop overtime, here are some tips that you can practice getting control over the game:

CS: GO is all about aiming. There’ll be instances when you’ll be blasting the entire magazine and the other guy would hit you instantly. However, that’s what’s important in the game. It’s about aiming right. You need to know what gun you’ve picked, it’s spray pattern and damage to survive the game. The spray pattern is the way bullets will be showered.

Every gun has its spray pattern that you need to know and remember. Apart from that, you also need to know how much damage the gun is causing. It can surely make a difference since you’ll need a few bullets rather than the entire magazine to kill the opponent. But what’s more important is to aim right. Practice to achieve headshots as well as improve your reflexes to make the first move.

Another important thing is to learn the map. This is important in two ways:

When you know the map, you minimize the chances of enemies sneaking up on you. In addition, you also gain a competitive advantage by changing your position after respawning. This also adds to your natural speed of playing since you need where are you headed. You don’t stand recognizing the map. Rather take action and attack the enemy before they attack you.

Jokes apart, this is important. How many times have you and your teammates have rushed to a point together just to get blasted by one guy? That is why you need to know the map and time your mobility. Don’t just rush towards one place and keep on going to that place all over again.

Change your positioning but most importantly change the way you approach. Keep a safe time distance and keep on a lookout for enemies approaching from behind. In this way, you can even spot out enemies that are rushing towards your mates.

One of the key differences between pro and noob players is the use of grenades. It’s not about just throwing them randomly but throwing them with accuracy. Professionals not only use every grenade type they own but throw it effectively enough to get the edge they need. Apart from that, they also know what the different sidearms can do.

From grenades to flashbangs and Molotov cocktails, know what you’re holding, what it can do, and how will you use it to gain the competitive edge you need. This not only allows you to keep the flow of the game tilted towards your side but gives you time to prepare while confronting your enemies.

Yes, for the last time, the sound is important! FPS games rely a lot on sounds can truly change the course of the battle. Even if you’re having simple handsfree, then go ahead and plug them in. The core perk? Hearing approaching enemy. No matter what FPS game you play, you can see players wearing headsets. That is not just to listen to game sounds or communicate with teammates but to hear the approaching enemy. Navigation via sound is also a key feature to winning the game.

Keep An Eye On The Minimap

Most players are unable to know what’s going on because they don’t observe minimap. This is quite a loss and many players fail during the intensive battle because they aren’t able to take measures according to the enemy’s movements. That is why keep an eye on your minimap to see where the battle is going on or the possible openings where the enemy will approach next. 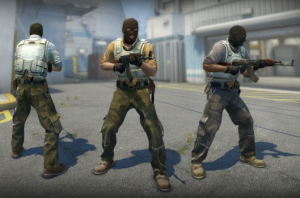 It’s all about living once, isn’t it? But you need to handle your expenditures while playing this game. That is why you must be knowledgeable about the guns you want to use. Don’t overspend because this can help in case you lose the next round. In addition, keep a check on your teammate’s money and enemy’s money as well. You’ll know what each of these can buy, which will get you prepared for the countermeasures.

Enemies also get a bonus for consecutive losses. This is done to keep the match balanced, giving the losing team a chance to regain the losses. On the other hand, aggressive players can still shoot you down with a Desert Eagle against you full-fledged purchase. So, don’t make it about purchases ever because, in the end, it comes down to who’s better at operating the weapon they wield.

Not all games can run on your setup. For FPS games you do need to have a good insight as well as a great gaming laptop for your gaming needs. Not only this would enable great performance but will also ensure smoother gameplay without any hassle.

Well, there you go. These are some of the insights that beginners to mid-level CS: GO players can utilize for elevating their performance. Get control, practice and you’ll get to pro-level in no time!

How To “Imposter” Your Way In Among Us

Does Oppo A15 Have Gorilla Glass?

Can I install Chrome OS on my Windows...

Which Processor Is Better For A Laptop,...