Samsung is back in the game with its third foldable display smartphone after the launch of the Z Flip and the Galaxy Fold. Samsung has claimed to offer better quality ultra-thin foldable glass, a bigger cover display, 5G support, and a punch hole for selfie camera with the Samsung Galaxy Z Fold 2. The newest feature is that the Samsung Galaxy Z Fold 2 comes with a new hinge that allows the user to tilt the display at different angles. So, you can use the phone as a laptop if you want. 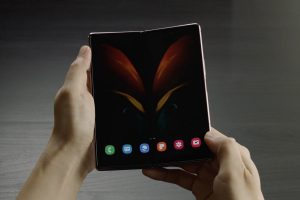 One of the major improvements by Samsung is that it has offered a full view 6.2-inch cover display with the Samsung Galaxy Z Fold 2 as compared to the older Fold model that sported a small cover display. What does this mean for the users? It means that the user does not need to unfold the display always, you can use it however you want.

Moreover, the cover display, when folded, measures at 6.2-inch and delivers an impressive HD+ 2260 x 816 pixels resolution. Paired with the Super AMOLED display that has an aspect ratio of 25:9 and 386ppi pixel, this smartphone is redefining visuals. 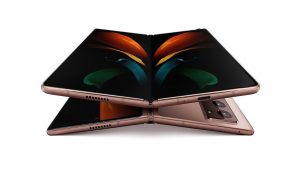 Meet the sweeper, a new hinge design introduced by Samsung in Galaxy Z Fold 2 to increase the longevity of the smartphone. The Sweeper is equipped with elastic fibres that keep dust and other particles outside the smartphone.

Other than introducing the Sweeper, Samsung has also made some changes in the overall design of Galaxy Z Fold 2. Apart from reducing the thickness, Samsung’s design team has added a new hinge that enables the device to stand at different angles. 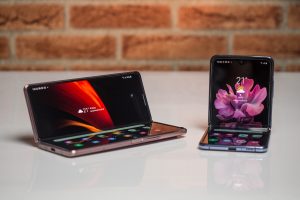 Weighing at just 282 grams and sporting a thickness of 1.7 cm when folded, this smartphone is the most stylish device we have ever laid our eyes on. With a never-seen-before camera setting, we cannot wait to get our hands on this smartphone and start snapping pictures wherever we go.

The new iPad Air 4 is releasing...

Oxygen OS 11: Released With The Latest...

The new Google Web Standard that could...